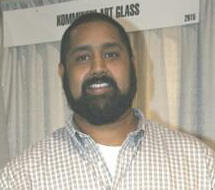 Raj Kommineni is an amazing glass artist with a style comparable to his intriguing name: first glance seems complex, but a second look exposes creative simplicity.  The same unique, classic style proves to be a trend in his glasswork.  Inspirationally charged by the tones in music, Raj is a holistic artist.  Meaning, he utilizes the spectrum of art expression to inspire his creations.
Raj was born in 1978 and raised in Acton, Massachusetts.  At a young age Raj was leisurely introduced to glass paperweights.  His visual fascination left a lasting imprint, but the intensity of his attraction to glass art must be attributed to the fact that glass is tangible…and we all know that children LOVE to touch.  His childhood memories are flooded with visions of colorful, fun and functional art.
In the latter part or Raj’s secondary schooling, he was exposed to the contemporary lampworking movement; furthering his glass fascination and education.  Shortly thereafter, he studied at the University of Massachusetts, Amherst.  A new world of glass was opened up to Raj while attending UMASS.  In 1996, Raj met his future teacher, Jerry Kelly.  The following year, he studied under Melanie Cansler of Fire Dance Glass.  These relationships nurtured an immediate love and dedication to working with glass.
Over the next two years, Raj spent intermittent time exploring and creating with glass.  Once Raj allotted time to full dedication of his glasswork, his technique inevitably flourished.  By 2000, he was working in a small glass gallery in Amherst that was owned by Jerry Kelly.  Working in the gallery gave Raj a newfound perspective on style and technique.  Exposure to furnace glass blowing and lampworking were major eye openers in his craft development, offering an education that the classroom could never provide at this rate.  But Raj continued to take classes under Jerry Kelly proving his accelerating dedication.  Furthermore, local and visiting artists frequented the gallery.  This traffic allowed Raj the opportunity to meet colleagues, potential buyers and philanthropists of the art, broadening his community.
Raj graduated from UMASS, Amherst in 2001 with a degree in Forestry.  By 2002, Raj undoubtedly showed forth his love for his craft by quitting his job and abandoning his main source of income to work at Fire On the Mountain Glass under Jerry Kelly.  One year later, Raj went under an intensive apprenticeship with Jerry.  Thereafter, Raj’s thoughts were consumed in working with glass.  Raj materialized his thoughts when he established Kommineni Art Glass in 2004.
Raj Kommineni focuses heavily on marbles and paperweights, but his talent extends to intricate small blown vessels, sculpture and personalized glass jewelry.  He is published in The Encyclopedia of Modern Marbles, Spheres, and Orbs by Mark Block, and Glass Line Magazine Volume 20, Number 3, 2006, Volume 21, Number 1 2007, Volume 21, Number 5 2008.